0255 – Lord of the Rings “Religious and Catholic” » What Did Tolkien Mean?

Did Tolkien really say that The Lord of the Rings is religious and Catholic”?

“The Lord of the Rings is of course a fundamentally religious and Catholic work; unconsciously so at first, but consciously in the revision.”

Just what did he mean by that?

On one hand, Tolkien most certainly did not intend for The Lord of the Rings to be read as a merely “symbolic” tale. In the Foreword to the book’s 2nd edition, he stated clearly that he did not intend to imbue the work with any hidden “inner meaning”, and denied that it was allegorical or topical.

So if that is the case, then what did Tolkien mean in his letter to Fr. Murray?

It all has to do with the idea of the “order of Grace“, the sacramental means by which God interacts with and gives life to His creation. We might even say it has to do with the concept of salvation history, which Tolkien connects Middle-earth to in other writings.

In episode 255, we begin an exploration of this topic, and discuss why it matters for all readers of Tolkien, and helps to deepen our appreciation of Middle-earth. Join us! 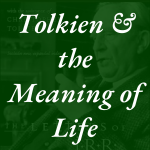 Towards the end of his life, a schoolgirl asked Tolkien for his views on “the purpose of life”. What did Tolkien say? In episode 171, we discuss his response and more! 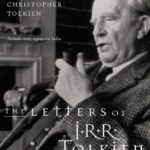 What role does religion play in the universe of Middle-earth? What importance do Tolkien’s own religious beliefs have for informing our understanding of the world 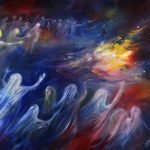 From the very beginning of its history, it is clear that Middle-earth is brimming with great spiritual powers. From the kingship of Manwë to the 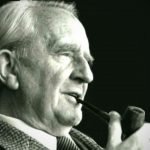 We’re discussing our listener feedback on our recent episodes “Lord of the Rings & Religion” and “Is Middle-earth Pagan?” This episode is executive produced by 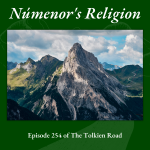 https://www.youtube.com/watch?v=882FhP0SqnA Why did Númenor exist? Was it simply to reward the Edain and their descendants? Or was there some greater purpose that impacted the rest 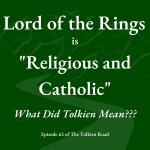 0255 – Lord of the Rings “Religious and Catholic” » What Did Tolkien Mean?

https://youtu.be/tnMDGBKCtsU Did Tolkien really say that The Lord of the Rings is religious and Catholic”? He sure did. In a 1953 letter to his long-time