What was the purpose of Númenor? In this episode, we explore that question through the lens of the song of Númenor.

Become a patron
Listen to "0320 » The Songs of Númenor » Elendil, The Lost Road, CS Lewis, The Rings Of Power" on Spreaker.

lovely is numenor but my heart resteth not here forever for here is ending and there will be an end and the fading when all is counted and all numbered at last but yet it will not be enough not enough what will the louvitar oh I loveitar give me in that day beyond the end when my son faileth hey there fellow Travelers welcome to the Tolkien Road episode 320. in this episode we’ll be taking a close look at the song of numenor an obscure poem of tolkiens that gets to the heart of numenor’s story before we get started on that I’d like to give a double up air 5 to our patrons three two one whoops hope I didn’t catch you off guard special thanks to this episode’s executive producers John R Caitlin ft with Tolkien Jacob blockham John H scotchy Bobo and aru27. become a patron by visiting patreon.com Tolkien Road your financial support helps the Tolkien road to keep on evering on and lend you some cool perks along the way learn more at patreon.com Tolkien Road check out truemistress.com for Tolkien Road merch like t-shirts signed copies of my books and the Glorious two trees camper mug just like this right here you’re use promo code lost 320 to get 10 off your order that’s truemidspress.com check out the show notes for the link and hey YouTube hit that like button don’t forget to subscribe and let us know what’s on your mind in the comments below all right so that bit of poetry I read at the beginning is from a passage in the Lost Road right here actually it’s from a footnote in the Lost road so we’ll get a little bit into that what was the purpose of numenor many of you know that I have argued that numenor’s purpose went beyond being a mere reward for the descendants of the Adine and seemed to be filled with symbolism and rituals intended to point them to a greater Destiny both in this world and Beyond it I’ve explored that in other videos we’ve talked about that on our rings of power reaction videos but you know I’m really starting to get into those kinds of questions more is I’d Begin work on my next book and um and I as I was reading through the Lost Road recently I found this poem and just was blown away by its beauty but also how it gets really to the heart of the numenorian legend like like what’s really there what caught what what Tolkien was thinking when he first conceived of this Legend right back in the late 30s 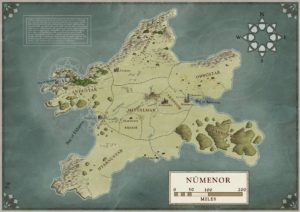 With the end of the First Age, Númenor – the land of gift – is granted to the group of Men that had aided the

The Fourth and Final part of our journey through “Aldarion & Erendis: The Mariner’s Wife” from Unfinished Tales. Join us as we explore this little-known

Part Three of our journey through “Aldarion & Erendis: The Mariner’s Wife” from Unfinished Tales. Join us as we explore this little-known legend of Númenor

We continue our journey through “Aldarion & Erendis: The Mariner’s Wife” from Unfinished Tales. Join us as we explore this little-known legend of Númenor and

Our Second Age Deep Dive continues as we begin our journey through “Aldarion & Erendis: The Mariner’s Wife” from Unfinished Tales. Join us as we