The Gods Of Middle-earth

Then those of the Ainur who desired it arose and entered into the World . . . they put on the raiment of Earth and descended into it, and dwelt therein... 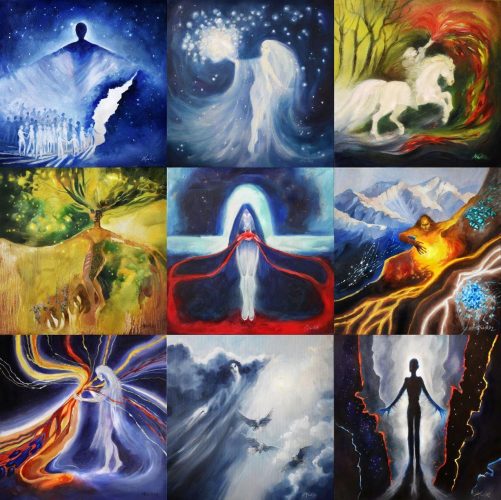 VALAR AND MAIAR, GANDALF AND SAURON

“Valaquenta” is subtitled “Account of the Valar and Maiar according to the lore of the Eldar.” The “Eldar” are the “Elves,” but more on that later. “Valaquenta” is basically a introduction to the personalities of the Valar, as well as an introduction to the Maiar. The Valar, of course, are the Ainur who descended into Arda at the beginning of time.

Manwë: He governs the winds, the clouds, and flying things. He is appointed to be king of Arda, and is closest to the mind of Ilúvatar. He is the spouse of Varda.

Ulmo: Lord of Waters. He is something of a loner with respect to the rest of the Valar, being spouseless, but holds in great love Elves and Men.

Aulë: Lord over all of the substance of which Arda is made. Aulë is a maker. He is most like Melkor in thought and in powers, and is tempted like Melkor, but ultimately remains faithful to Ilúvatar. His spouse is Yavanna.

Mandos: aka Námo. “He is the keeper of the Houses of the Dead, and the summoner of the spirits of the slain” (28). His spouse is Vairë.

Lórien: aka Irmo. He “is the master of visions and dreams” and a creator of great gardens (28). His spouse is Estë.

Tulkas: “the Valiant.” He delights in wrestling, and is a joyful warrior, with no thought for the past or the future, only the present. He “is of no avail as a counsellor, but is a hardy friend” (29). His spouse is Nessa.

Oromë: Lover of the lands of Middle-earth and friend to its peoples. His spouse is Vána.

Varda: “Lady of the Stars.” Called “Elbereth” by the Elves. The light of Ilúvatar “lives still in her face.” Melkor fears her “more than all others whom Eru made.” She is the spouse of Manwë. Together they enrich the other’s powers.

Yavanna: “The Giver of Fruits.” She is devoted to all growing things, great or small. Spouse to Aulë.

Vairë: “The Weaver.” She weaves all things into her storied webs. Spouse to Mandos.

Estë: “Healer.” She sleeps during the day, and it is in her fountains that the burdened find rest. Spouse to Lórien.

Nienna: She grieves for the wounds that Melkor has inflicted upon the world. She resides close to the Halls of Mandos, but she is spouse to none, though she is sister to The Fëanturi.

Nessa: Dancer, and lover of deer. She is the sister of Oromë and the spouse of Tulkas.

Vána: “The Ever-young.” She is the sister of Yavanna. “All flowers spring as she passes and open if she glances upon them; and all birds sing at her coming” (29).

The “servants and helpers” of the Valar, “of the same order as the Valar but of less degree” (30).

Ilmarë: “The Handmaid of Varda.”

Eönwë: “The Herald of Manwë.” Mightiest in arms in all of Arda.

Ossë: Vassal of Ulmo. “Master of the seas.” He is dangerous, and Melkor sought to draw him to himself for the purpose of subduing the seas. Ossë is loved by seafarers, but not trusted.

Uinen: “Lady of the Seas.” She sets the calm upon them after Ossë troubles them.

Melian: Servant of Vána and Estë. A figure with an important and special destiny.

Olórin: Wisest of the Maiar. He learned much of “pity and patience” from Nienna ere coming to the aid of The Children of Ilúvatar in a later age. He will later be known by the names Mithrandir and Gandalf.

Those seduced to the service of Melkor.

Melkor: “He who arises in Might.” Later named Morgoth, “The Dark Enemy of the World.” “From splendour, he fell through arrogance to contempt for all things save himself” (31). Darkness is his realm, though he greatly desired the Light for himself alone.

Valaraukar: “the demons of terror,” later known as Balrogs. Maiar corrupted by Melkor.

Sauron: aka Gorthaur the Cruel. A Maiar of Aulë who is corrupted by Melkor and has a hand in all his doings in Arda.

There really isn’t any action in Valaquenta. It’s not really even a narrative. Instead, it’s a catalog of sorts. However, here is a quick breakdown of the various sections.

Of the Valar: Introduces the 7 Valar and the 7 Valier, those of the Ainur who chose to descend into Arda as its great powers. We learn a good deal about the personality of each.

Of the Maiar: Beings of the same order but lesser degree, the Maiar are servants to the Valar but great powers in their own right. We only learn about a handful of the Maiar, but they are highly important figures.

Of the Enemies: Maiar who were corrupted by Melkor are introduced here (though not all).

Names, Names, Names: Most of the characters have more than one name. Tolkien loved to name things, which was of course rooted in his love of language. The new names tend to open up different aspects of the figures’ personalities.

Nienna’s Sorrow: “So great was her sorrow, as the Music unfolded, that her song turned to lamentation long before its end, and the sound of mourning was woven into the themes of the World before it began” (28). Sorrow plays a major part throughout Tolkien’s works.

Interested to learn more about “Valaquenta”? Watch this video for a through discussion of the chapter’s contents.