SilmGuide:
Chapter 2
Of Aulë and Yavanna

Of Dwarves, Eagles, and ENTS

Since they were to come in the days of the power of Melkor, Aulë made the dwarves strong to endure... 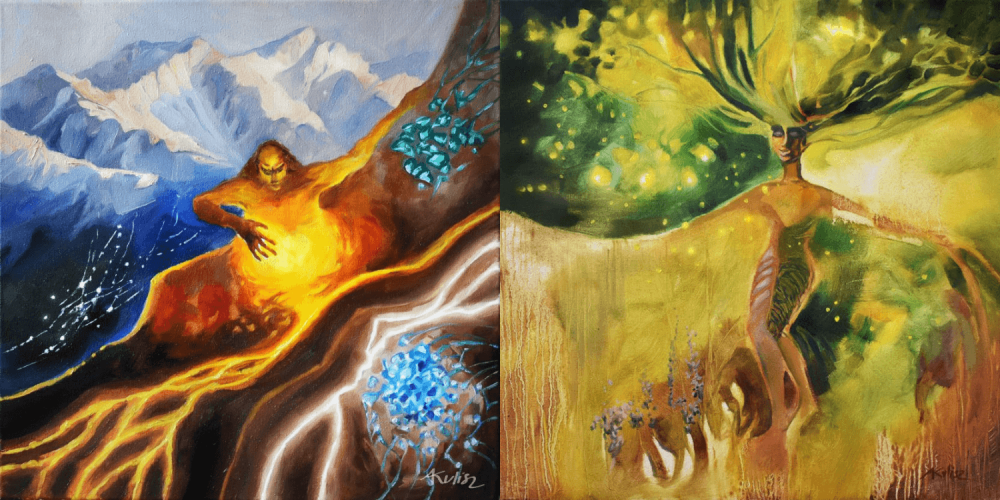 THE STRANGE ORIGIN OF THE DWARVES

Aulë: Valar and lord over all of the substance of which Arda is made. Aulë is a maker; his heart is in fashioning the material of the earth into beautiful creations. Spouse to Yavanna.

Ilúvatar: The One, the God-figure of Tolkien’s cosmogony.

Yavanna: “The Giver of Fruits.” She is devoted to all growing things, great or small. Spouse to Aulë.

Manwë: King of Arda under Ilúvatar.

Aulë Creates the Dwarves: The Valar entered Middle-earth for, among other things, love of the Children of Ilúvatar. Aulë grows impatient for their awakening, and so he creates the 7 dwarf fathers. Ilúvatar chides him for his impatience however, noting, among other things, that the dwarves are reliant upon Aulë’s thought, and if “his thoughts turn elsewhere,” they will be idle. When Aulë repents and seeks to destroy the dwarves, Ilúvatar intervenes and offers to give them life, though they will not come forth from their sleep until the Firstborn Children of Ilúvatar.

Yavanna Responds to Aulë’s Creation: “Yet because thou hiddest this thought from me until it’s achievement, thy children will have little love for the things of my love” (Silmarillion 45). Unlike Manwë and Varda, Aulë and Yavanna seem to work against each other. Yavanna tells Aulë that because he created the dwarves without her aid, they will have little love for the animals and growing things of the world. She pleads for intervention from Manwë, and Manwë reminds her that their thoughts mingled in the Music of the Ainur, and will give rise to the Eagles. Furthermore, in the forests shall dwell “the Shepherds of the Trees” (46).

Aulë’s Humility: Though Aulë was unwilling to await the designs of Ilúvatar, He nevertheless has pity upon Aulë because his desire was “to love and to teach them,” not to dominate them as Melkor sought (43). It can thus be seen that Aulë’s humility is the dwarves’ saving grace.

Strife Between Elves and Dwarves: Though Ilúvatar decides to invest the dwarves with will and life, they nevertheless will not come forward until the Elves do, as these are Ilúvatar’s “Firstborn.” Furthermore, there will be strife between the Elves and the Dwarves, the children of “adoption” and of “choice.” (44) While the grace of Ilúvatar gives life to the dwarves, there are still indelible consequences for Aulë’s impatience.

Eagles and Ents: Yavanna, upon learning of Aulë’s work, knows that the dwarves will have little love for the things that she loves (growing things and animals). She thus consults Manwë, who informs her that from the song will come forth both the Eagles and “The Shepherds of the Trees” to serve as protectors of the things that she loves. These were in fact elements of the Music of the Ainur, though little known prior to the action of Aulë.

Interested to learn more about Chapter 2 of The Silmarillion? Watch these videos for a through discussion of the chapter’s contents.