SilmGuide:
Chapter 4
Of Thingol and Melian

But he came at last to a glade open to the stars, and there Melian stood; and out of the darkness he looked at her, and the light of Aman was in her face... 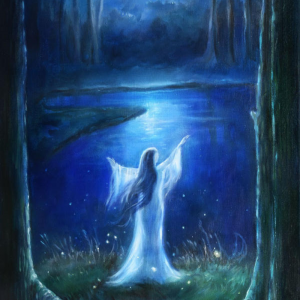 Image Credits: “Luthien Dancing in the Moonlight” by kuliszu

HOW THE ELVES GOT TO VALINOR

Chapter 4 of The Silmarillion is a short and succinct “boy-meets-girl” story, or so a surface reading would suggest. However, it is an important development in the history of Middle-earth, and in it we see key themes begin to develop to the point of fruition.

Thingol (Elwë): King of the Teleri, he loses that kingship upon meeting Melian.

Melian: A Maia, she is of the same order as the Valar, and was with Ilúvatar before Eä.

Lúthien: The daughter of Thingol and Melian, she is not mentioned by name in the chapter, but she is the one named as “the fairest of the Children of Ilúvatar that was or shall ever be” (56).

Elwë and Melian Meet: While on the great journey to Aman, Elwë comes upon Melian after hearing her song. He sees the light of Aman in her face, and a spell falls upon him.

Elwë Misses the Boat: Because of the spell, which entrances Elwë for many years, the Teleri are unable to find Elwë, and so his people elect Olwë (his brother) their new leader and depart Middle-earth for Aman.

The Blood of the Ainur: Through the union of Thingol and Melian, the “blood” of the Ainur enters into a particular strand of the Children of Ilúvatar. This strand will continue down to the Third Age and beyond.

The Power of Song: Again, we see that music is woven into the fabric of Eä as a power perhaps beyond any other. Melian’s song is enough to enchant Elwë into seeking her out alone in the forest.

MELIAN, MAIA: “Melian was a Maia, of the race of the Valar. She dwelt in the gardens of Lórien, and among all his people there were none more beautiful than Melian, nor more wise, nor more skilled in songs of enchantment.” (55)

LOST IN THE WOODS: “Elwë, lord of the Teleri, went often through the great woods to seek out Finwë his friend in the dwellings of the Noldor; and it chanced on a time that he came alone to the starlit wood of Nan Elmoth, and there suddenly he heard the song of nightingales.” (55)

PARADISE LOST(?): “Thus Elwë’s folk who sought him found him not, and Olwë took the kingship of the Teleri and departed, as is told hereafter. Elwë Singollo came never again across the sea to Valinor so long as he lived, and Melian returned not thither while their realm together lasted; but of her there came among both Elves and Men a strain of the Ainur who were with Ilúvatar before Eä.” (55-56)

FAIREST CHILD: “And of the love of Thingol and Melian there came into the world the fairest of all the Children of Ilúvatar that was or shall ever be.” (56)

Interested to learn more about Chapter 3 of The Silmarillion? Watch these videos for a through discussion of the chapter’s contents.