Therefore Ulmo uprooted an island which long had stood alone amid the sea, far from either shore, since the tumults of the fall of Illuin; and with the aid of his servants he moved it, as it were a mighty ship, and anchored it in the Bay of Balar, into which Sirion poured his water. Then the Vanyar and the Noldor embarked upon that isle, and were drawn over the sea, and came at last to the long shores beneath the Mountains of Aman; and they entered Valinor and were welcomed to its bliss... 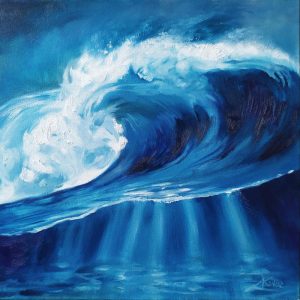 Image Credits: “Luthien Dancing in the Moonlight” by kuliszu

In this chapter, we come to find out how the three Elvish peoples (the Vanyar, the Noldor, and the Teleri) came to Aman. We also learn a great deal more about the Noldor and the Teleri, and about the personalities of these groups of Elves. The princes of the Noldor, in particular, start to come into focus as key players near the end of the chapter. (FYI, “Eldamar” is the name of the Elves’ realm in Aman; “Eldalië” is just another form of “Eldar” or “Elves.”)

Ulmo: The Valar of the seas, he arranges for the passage of the Elves to Aman.

Teleri: The lovers of the sea, who are delayed and miss the first voyage to Aman.

Vanyar and Noldor: The groups of Elves who make the first trip to Aman.

Island Ship: In order to transport the Elves to Aman, Ulmo uproots part of an island near the shores of Middle-earth and makes of it an island ferry. This island eventually becomes known as Tol Eressëa, the Lonely Island, and the part that remains becomes the Isle of Balar.

Teleri Finally Show Up: Though they are delayed, most of the Teleri finally do join the Vanyar and the Noldor in Aman. Still this brings much sorrow to Ossë, who loves the sound of the Teleri upon the shores of Beleriand.

Seats of Elvish Kings: Different homes are given to the Elves. We can generally understand their arrangement into the following “seats” or thrones:

Fëanor & the Princes of the Noldor: While we have been dealing in a “general sweep” for most of The Silmarillion thus far, it is here that Fëanor and the other Noldor princes begin to come into focus as figures around whom a grand narrative will form.

Brotherhood of the Elves: The story really takes off after this chapter, but it’s important to realize that at this point all of the Elves that arrive in Aman are quite close. Once the Teleri finally do arrive, it just seems like we might say “And they all lived happily ever after…” If only!

OF FËANOR: “Fëanor was the mightiest in skill of word and of hand, more learned than his brothers; his spirit burned as a flame.”

OF GALADRIEL: “A sister they had, Galadriel, most beautiful of all the house of Finwë; her hair was lit with gold as though it had caught in a mesh the radiance of Laurelin.”

Interested to learn more about Chapter 5 of The Silmarillion? Watch this video for a through discussion of the chapter’s contents.