SilmGuide:
Chapter 6
Of Fëanor and the Unchaining of Melkor

But the Noldor took delight in the hidden knowledge that [Melkor] could reveal to them; and some hearkened to words that it would have been better for them never to have heard... 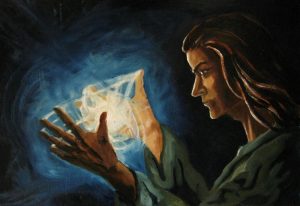 Image Credits: “The Making of the Silmarils” by kuliszu

OF MELKOR’S MALICE AND MANWË’S NAIVETE

This chapter is really the quiet calm before the storm. All hell is about to break loose. Yet first, we must become acquainted with the great Fëanor, and also understand how Melkor comes once again to freedom.

Fëanor: The “fiery spirit.” He is perhaps the greatest in talent of all the Noldor, “the most subtle in mind and the most skilled in hand” (64).

Míriel: First wife of Finwë, she dies after suffering much in the birth of Fëanor.

Finwë: High King of the Noldor, and father of Fëanor.

The Birth of Fëanor and the Death of Míriel: When Míriel gives birth to Fëanor, her spirit is so sapped of life-giving energy that she knows she will be unable to bring forth any more children. When she goes to the gardens of Lórien to recuperate, her spirit is carried away and her life is lost.

Finwë Remarries: Though Finwë is greatly distraught, he still desires to bring forth more children so that they too may enjoy the bliss of Aman. He remarries Indis, who gives birth to Fingolfin and Finarfin (who happens to be the father of Galadriel). Fëanor is not pleased with his father’s remarriage.

Melkor Unchained: After a long period of imprisonment, Melkor claims true repentance, and sues for release. Naively, Manwë releases him, thinking him authentic, and Melkor dwells among the peoples of Aman, sharing with them knowledge yet also poisoning them against one another.

Fëanor is the Fiery Spirit: For his greatness, Fëanor is also a tragic figure. The key here is that he was “eager and steadfast” in the pursuit of all of his purposes (64). There is no measure, no consideration in the great things devised by Fëanor, only purpose and intent.

Melkor’s Malice and Manwe’s Naiveté: Melkor deceives Manwë into thinking he is truly repentant, and thus obtains his conditional release. Manwë is blind to Melkor’s true motives because of his innocence.

Choices and Consequences: If Finwë had never remarried, maybe all of the tragedy that will come would never have happened. Yet because of his second marriage, great figures nevertheless come forth.

Melkor Targets the Noldor: Because their skills are similar, the Noldor make perfect targets for Melkor as he plots his sinister designs.

THE NOONTIDE OF VALINOR: “Now the Three Kindreds of the Eldar were gathered at last in Valinor, and Melkor was chained. This was the Noontide of the Blessed Realm, the fullness of its glory and its bliss, long in tale of years, but in memory too brief. In those days the Eldar became full-grown in stature of body and of mind, and the Noldor advanced ever in skill and knowledge; and the long years were filled with their joyful labours, in which many new things fair and wonderful were devised.”

OF MELKOR’S REBELLION: “For Manwë was free from evil and could not comprehend it, and he knew that in the beginning, in the thought of Ilúvatar, Melkor had been even as he; and he saw not to the depths of Melkor’s heart, and did not perceive that all love had departed from him for ever. But Ulmo was not deceived, and Tulkas clenched his hands whenever he saw Melkor his foe go by; for if Tulkas is slow to wrath he is slow also to forget. But they obeyed the judgement of Manwë; for those who will defend authority against rebellion must not themselves rebel.”

MELKOR’S HATRED FOR THE ELDAR: “Now in his heart Melkor most hated the Eldar, both because they were fair and joyful and because in them he saw the reason for the arising of the Valar, and his own downfall. Therefore all the more did he feign love for them and seek their friendship, and he offered them the service of his lore and labour in any great deed that they would do . The Vanyar indeed held him in suspicion, for they dwelt in the light of the Trees and were content; and to the Teleri he gave small heed, thinking them of little worth, tools too weak for his designs. But the Noldor took delight in the hidden knowledge that he could reveal to them; and some hearkened to words that it would have been better for them never to have heard.”

Interested to learn more about Chapter 6 of The Silmarillion? Watch this video for a through discussion of the chapter’s contents.