SilmGuide:
Chapter 7
Of the Silmarils and the Unrest of the Noldor

Then Melkor lusted for the Silmarils, and the very memory of their radiance was a gnawing fire in his heart... 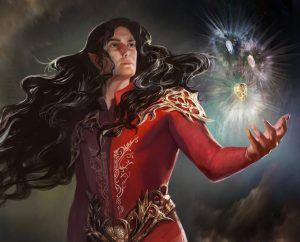 Image Credits: “Feanor and the Silmarils” by BellaBergolts

OF FËANOR’S WORKS AND THE LUST OF MELKOR

In this chapter, we learn what a Silmaril is and clouds begin to gather over the blessed realm of Valinor.

Fëanor: Greatly skilled at the creation of jewels, he fashions the Silmarils using the light of the Two Trees.

Finwë: High King of the Noldor, he strives to keep the peace among his people, but unrest seeps in nonetheless.

Fingolfin: Fëanor’s half-brother whom he threatens, wrecking the peace of Valinor.

Melkor: His poisonous murmurings begin to come to fruition here.

Silmarils Created: Fëanor creates the Silmarils, Varda hallows them, and the three jewels become the wonder of the Blessed Realm.

Fëanor’s Threats: Fëanor’s jealousy for the Silmarils leads him to forge weapons and eventually to threaten the life of his half-brother Fingolfin.

The Silmarils’ Effect: Fëanor guards his creations jealously, while Melkor lusts to possess them. For their great beauty, they essentially take the blended light of the Two Trees and make them a thing that may be possessed by a few instead of by all.

Fëanor’s Brooding: Fëanor is banished for threatening his brother, and he and his seven sons create the stronghold of Formenos to the north, wherein they lock the jewels and guard them. Fëanor begins to see everyone as a threat, some rightfully so of course (Melkor), but others not so much (the Valar).

Melkor’s Plots: Melkor is a master plotter. He is willing to work in the shadows with subtlety in order to see his plans come to full fruition. Interestingly, we learn that the Elves know not of the coming of Men yet, and Melkor tells them that the Valar have held this information from them in order to imprison them in the Blessed Realm and to hold them back from the vastness of the rest of Arda.

HOLY SILMARILS: “All who dwelt in Aman were filled with wonder and delight at the work of Fëanor. And Varda hallowed the Silmarils, so that thereafter no mortal flesh, nor hands unclean, nor anything of evil will might touch them, but it was scorched and withered; and Mandos foretold that the fates of Arda, earth, sea, and air, lay locked within them. The heart of Fëanor was fast bound to these things that he himself had made.”

MURMURING FOR FREEDOM: “Thus ere the Valar were aware, the peace of Valinor was poisoned. The Noldor began to murmur against them, and many became filled with pride, forgetting how much of what they had and knew came to them in gift from the Valar. Fiercest burned the new flame of desire for freedom and wider realms in the eager heart of Fëanor; and Melkor laughed in his secrecy, for to that mark his lies had been addressed, hating Fëanor above all, and lusting ever for the Silmarils.”

HALF-BROTHER VS HALF-BROTHER: “Fingolfin bowed before Finwë, and without word or glance to Fëanor he went from the chamber. But Fëanor followed him , and at the door of the king’s house he stayed him; and the point of his bright sword he set against Fingolfin’s breast. ‘See, half-brother!’ he said. ‘This is sharper than thy tongue. Try but once more to usurp my place and the love of my father, and maybe it will rid the Noldor of one who seeks to be the master of thralls.’ These words were heard by many, for the house of Finwë was in the great square beneath the Mindon; but again Fingolfin made no answer, and passing through the throng in silence he went to seek Finarfin his brother.”

Interested to learn more about Chapter 7 of The Silmarillion? Watch this video for a through discussion of the chapter’s contents.