SilmGuide:
Chapter 8
Of the Darkening of Valinor

The Conspiracy of Melkor and Ungoliant

Soon the Holy Mountain stood alone, a last island in a world that was drowned... 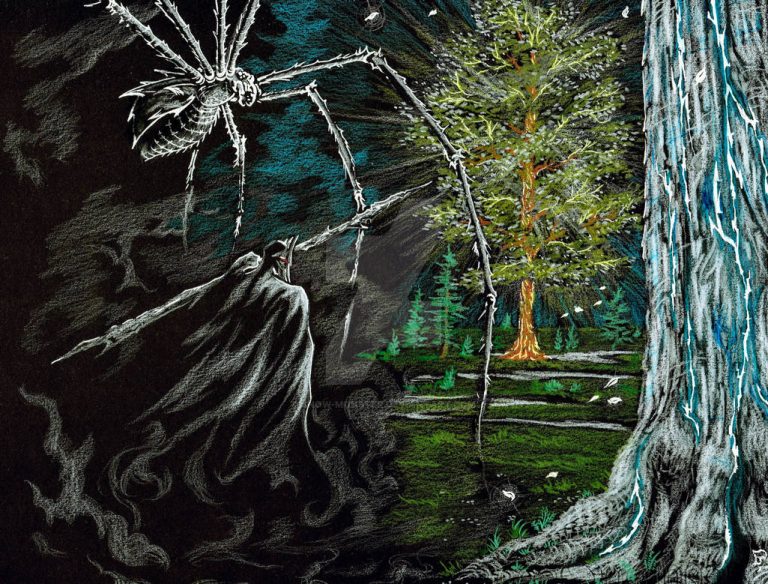 Image Credits: “Of the Darkening of Valinor” by Snow-Monster

In this chapter, the bliss of Valinor comes to an end as Melkor’s plot unfolds.

Melkor: Melkor’s malicious plot is unveiled fully in this chapter. He no longer lurks in the shadows, but enters openly into war with the Valar and the Elves.

Ungoliant: A figure that had previously been corrupted to Melkor’s service (perhaps a Maia), she forsook his service and took the form of a giant spider.

Fingolfin & Fëanor: They achieve something like a reconciliation here, but the terms of it will bear ill fruit for many.

Melkor Enlists Ungoliant: Melkor eludes the hosts of Valinor, and doubles back to the south where he finds Ungoliant. He promises her her fill of the Light of Valinor if she will serve his purposes.

The Trees Are Murdered: Melkor and Ungoliant attack and kill the Two Trees of Valinor at a time of festival in Valinor.

Darkness Descends on Valinor: The murder of the Two Trees results in an overwhelming and suffocating darkness in the Blessed Realm, and chaos ensues.

Ungoliant’s Hunger: Ungoliant “hungered for light and hated it” (73). Her appetite is insatiable, and she desires to please none but herself. She only works for Melkor insofar as he can provide her with that for which she hungers.

A Living Darkness: The darkness is more than just an absence of light; it is “a thing with being of its own: for it was indeed made by malice out of Light, and it had powers to pierce the eye, and to enter heart and mind, and to strangle the will” (76).

Melkor’s Designs: Melkor has a darker aim than merely the death of the Two Trees. In fact, their death is a means to an end, an end which will be revealed in the next chapter.

Interested to learn more about Chapter 8 of The Silmarillion? Watch this video for a through discussion of the chapter’s contents.