SilmGuide:
Chapter 9
Of the Flight of the Noldor

Tears unnumbered ye shall shed; and the Valar will fence Valinor against you... 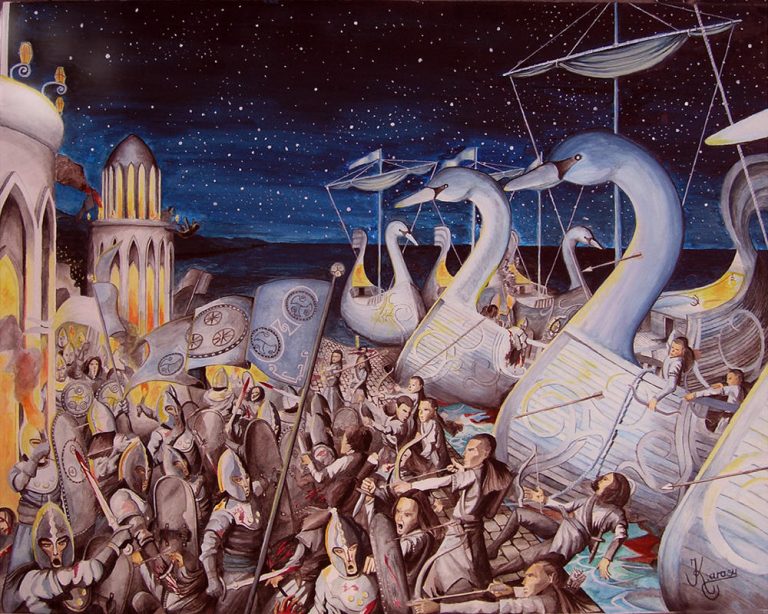 Image Credits: “The Kinslaying” by ivoignob

Previously, Melkor and Ungoliant have slain the Two Trees and stolen the Silmarils. This chapter concerns the consequences of these actions for the Valar and the Elves, as well as the fate of Ungoliant.

Yavanna: She believes there may be a chance to heal the Two Trees with the aid of the Silmarils.

Fëanor: He summons the Noldor to pursue Melkor and regain the Silmarils.

Teleri: The Noldor want their ships to pursue Melkor but the Teleri refuse.

Melkor | Morgoth: Fëanor dubs Melkor “Morgoth,” the “Black Foe of the World.” From here on out he is known by that name. (79)

Morgoth vs. Ungoliant: Morgoth and Ungoliant flee north and travel across the ice to Beleriand in the north of Middle-earth. Morgoth gives Ungoliant all of the great jewels to devour except for the Silmarils. Ungoliant assaults Morgoth, but they are close enough to the ruins of Angband for his servants the Balrogs to hear his cries and come to his rescue.

The Noldor Pursue the Silmarils: Fëanor vows to pursue Morgoth and reclaim the Silmarils and many of the Noldor join him. In doing so, he acts against the will of the Valar, and cuts himself off from the Blessed Realm.

Ungoliant’s Fate: Ungoliant’s ultimate fate is mysterious (it is thought that she ultimately devours herself), yet we do know she spawns the giant spiders that come to inhabit various locations in Middle-earth.

Fëanor’s Oath: Fëanor and his sons take an oath to claim the Silmarils as their own, vowing to pursue any who would deny them, and to not let any stand in their way. This great oath leads to enormous tragedy in the rest of The Silmarillion.

The Kinslaying: The Noldor attempt to coerce their brethren the Teleri into aiding their pursuit by means of their ships. When the Teleri resist, what results is great bloodshed of both Teleri and Noldor.

Interested to learn more about Chapter 9 of The Silmarillion? Watch this video for a through discussion of the chapter’s contents.