SilmGuide:
Chapter 10
Of the Sindar

Though Middle-earth lay for the most part in the Sleep of Yavanna, in Beleriand under the power of Melian there was life and joy... 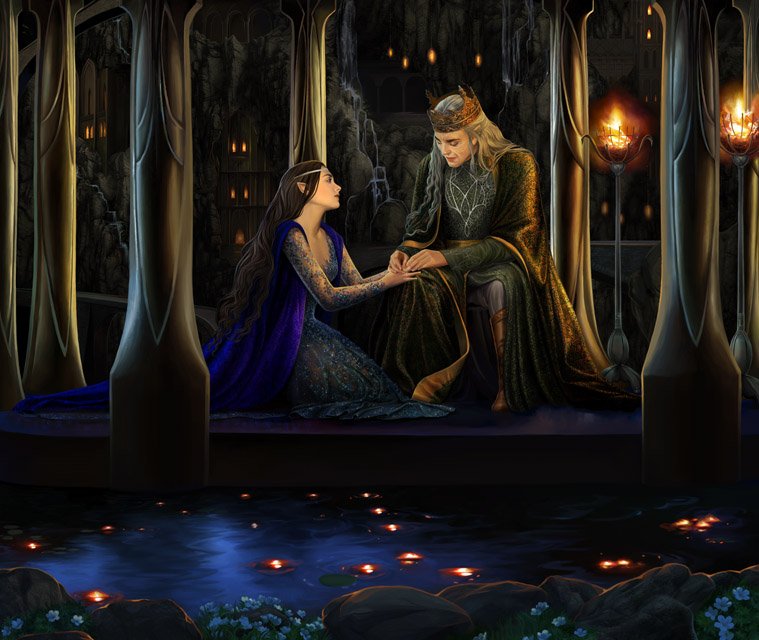 MEANWHILE, BACK IN BELERIAND…

The Noldor, led by Fëanor, have re-entered Beleriand in pursuit of Morgoth and the Silmarils. This chapter brings us up to speed with the Elves that already inhabit Beleriand, especially the people of Thingol (a.k.a. the Sindar) and what has transpired in the many years since their brethren departed Beleriand for the Blessed Realm.

Moriquendi: These are Elves who have not seen the light of Valinor.

Sindar: These are Moriquendi who set out for Valinor but stopped in Beleriand. They are otherwise known as the Grey Elves and are ruled by Thingol and Melian.

Dwarves: Or Naugrim, who enter Beleriand over the Blue Mountains and establish a profitable relationship with Thingol.

Thingol and Melian: They have established a great kingdom in Beleriand while most of Middle-earth still slumbers.

The Coming of the Dwarves: After awakening in the east, they join with Thingol’s people, to create Menegroth, the Thousand Caves.

The First Battle of Beleriand: The Sindar join with other Elves to do battle with Morgoth’s forces and achieve a limited victory.

The Girdle of Melian Established: Melian creates a magical barrier around the kingdom of Doriath to keep out intruders.

Morgoth Brings War: Morgoth doesn’t intend to simply sit in Angband and gaze at the Silmarils forever. He intends to bring death and destruction to Beleriand just as he brought it to Valinor.

Behind Every Great Man…: Thingol’s kingdom will endure longer than most, in large part owing to the great powers of Melian.

Interested to learn more about Chapter 10 of The Silmarillion? Watch this video for a through discussion of the chapter’s contents.