The Forsaken Children of the Sun

At the first rising of the Sun the Younger Children of Ilúvatar awoke in the land of Hildórien in the eastward regions of Middle-earth... 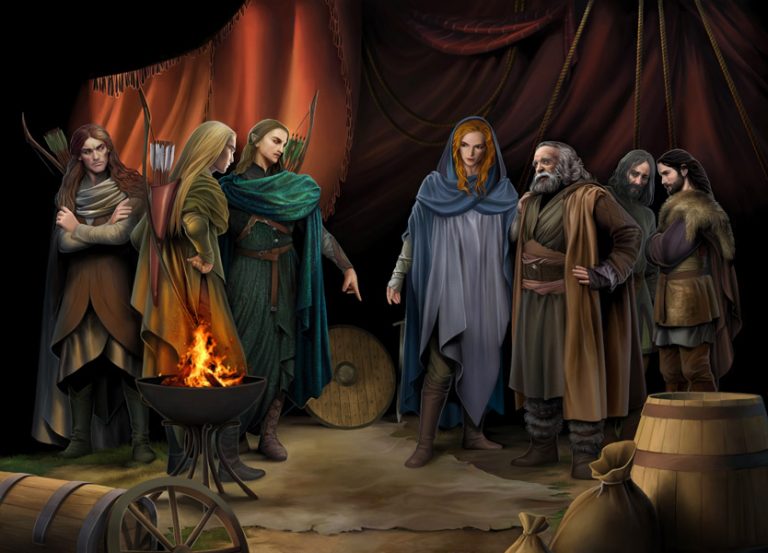 Image Credits: “Finrod, Beor and the Green-elves of Ossiriand” by steamey

Men – the Younger Children of Ilúvatar – awaken with the sunlight. Chapter 12 of The Silmarillion lays the groundwork for the coming of Men into Beleriand.

The Flowering of Middle-earth: Morgoth’s power is at bay, so the handiwork of Yavanna begins to blossom and the lands of the East become beautiful.

A Kindred Tension: Though alike in many ways, Elves and Men are destined to have a tension between them, with Elves as the immortal Firstborn and Men as the mortal Secondborn. This can be seen in the various names given Men by the Elves: “Second People”, “Followers”, “After-born”, “Sickly”, “Usurpers”, “Strangers”, “Inscrutable”, “Self-cursed”, “Heavy-handed”, and “Night-fearers” (103).

No Guide: Men have no Vala to guide them to the Blessed Realm. They are drawn West by the rising of the Sun. Still, Ulmo takes thought of them, and keeps them in the mind of Manwë.

A New Theme: The fate of Men is not foretold in the Music of the Ainur. Therefore, the coming of Men introduces a new strand of free will into the story of Eä.

While Tolkien’s tales are generally Elf-focused, Men play an indispensable role. The dynamic he developed with the contrasting Children of Ilúvatar was a stroke of genius, and this chapter begins a turning point in The Silmarillion.

Interested to learn more about Chapter 12 of The Silmarillion? Watch this video for a through discussion of the chapter’s contents.