SilmGuide:
Chapter 17
Of the Coming of Men into the West

‘A darkness lies behind us,’ Bëor said; ‘and we have turned our backs upon it, and we do not desire to return thither even in thought. Westwards our hearts have been turned, and we believe that there we shall find Light.’ 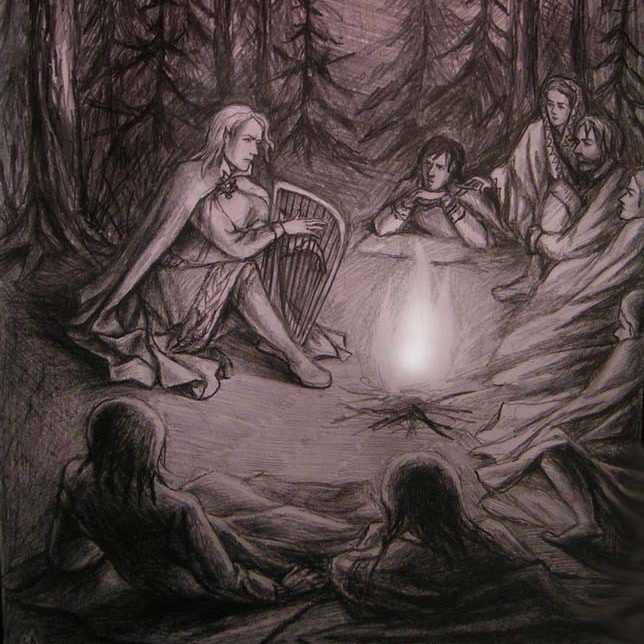 Image Credits: “Finrod and the kindred of Beor” by edarlein

MEN JOIN THE WAR AGAINST MORGOTH

We knew Men were coming, and now they have entered into Beleriand. We learn about the beginnings of their relationship with the Elves, and what an Edain is. By the way, this is last relatively calm chapter in The Silmarillion. The stage has been set, and a lot of adventure, war, and destruction is about to be unleashed.

The Edain: The men who enter into Beleriand and become “elf-friends” are known as the Edain. The leaders of these 3 houses are Bëor, Marach, and Haldad. Though many more Men exist elsewhere, these are the only 3 groups that really establish any presence in Beleriand.

Finrod & Bëor: Finrod discovers the house of Bëor while riding in the wilderness of Beleriand. He sneaks into their midst as they sleep and plays beautiful music for them that harkens to the wonder and bliss of Valinor. Finrod and Bëor become such friends that Bëor becomes a vassal in Nargothrond.

Bereg’s Rebellion: Bereg, one of Bëor’s descendants, questions the motives of the Elves and thus leads some Men out of Beleriand and back over the Blue Mountains into Eriador. Amlach, his partner in rebellion, repents and stays in Beleriand.

The Suffering of the Haladin: The House of Haldad suffers greatly at the hands of Morgoth. Though some survive, they find a home in a safe part of Beleriand and choose to essentially stay out of the way.

Morgoth’s Song: From the beginning, Morgoth has been the sower of lies among allies and friends. From even before the arrival of the Edain in Beleriand he is working to sow the seeds of suspicion between Men and Elves.

Mortality: Elves are not used to the idea of death by old age, so the natural deaths of Men are a mysterious and frightening thing for them.

Thingol, Hypocrite: Thingol, that upstart who took a Maia as his spouse, forgets his roots and looks down with disgust upon Men. While other Elves seek to befriend the Edain, Thingol bars them from Doriath.

Interested to learn more about Chapter 17 of The Silmarillion? Watch this video for a through discussion of the chapter’s contents.