SilmGuide:
Chapter 18
Of the Ruin of Beleriand AND THE FALL OF FINGOLFIN

Morgoth had long prepared his force in secret, while ever the malice of his heart grew greater, and his hatred of the Noldor more bitter; and he desired not only to end his foes but to destroy also and defile the lands that they had taken and made fair. 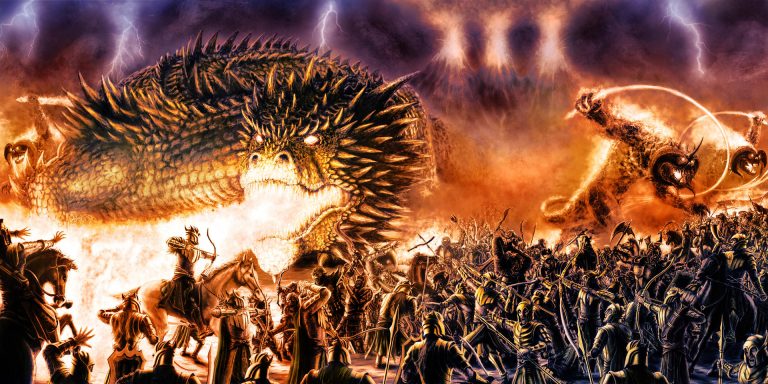 In Chapter 18, Angband breaks loose upon Beleriand. A lot happens in this chapter, so I am going to be reviewing it in 2 parts. This first part will cover The Battle of Sudden Flame. The second part will cover its aftermath.

Fingolfin: The High King of the Noldor since the death of Fëanor back in Chapter 13.

Morgoth: He has been biding his time within his dungeon fortress, devising an enormous war machine.

Glaurung the Golden: Originally unleashed in Chapter 13, he has been gaining strength and size and is ready to do some serious damage.

Barahir: The warrior who saved Finrod’s life and the father of Beren.

Sauron: Morgoth’s nasty lieutenant, aka Gorthaur the Cruel, he has learned well the ways of his master.

Húrin and Huor: Mighty warriors and leaders among Men whose lives will be of much consequence in the coming upheavals of the First Age.

The Battle of Sudden Flame: Things have been relatively quiet in Beleriand for many years now, but all the time Morgoth has been devising a destructive capability beyond any previously known to the Elves. He unleashes rivers of flame along with hordes of Balrogs and Orcs (and other foul creatures) upon the siege forces and quickly overwhelms them.

Barahir Saves Felagund: Barahir, a descendant of Bëor, rescues Finrod Felagund from certain doom. For this, Finrod swears to him an oath of eternal friendship which will prove important later.

Fingolfin vs. Morgoth: Fingolfin has had enough. He rides up to the gates of Angband and challenges Morgoth to single combat. Though Fingolfin fights bravely against his literally towering foe, he ultimately dies at Morgoth’s hands.

Sauron Captures Minas Tirith: Before the Minas Tirith of Gondor, there was a watchtower of the same name built on Tol Sirion, intended to keep guard on Angband. Sauron and his forces capture the fortress, and rename it the Isle of Werewolves.

Húrin and Huor Leave Gondolin: After the eagle Thorondor rescues them and brings them to Gondolin, Húrin and Huor dwell there for a year with Turgon’s blessing. They are permitted to leave when Thorondor agrees to give them transport away, and they swear an oath never to reveal their whereabouts.

Missions to Valinor: Realizing that times are growing desperate in Beleriand, Turgon sent some of his people on a mission to Valinor in order to obtain the aid of the Valar. However, these missions are unsuccessful, as none can obtain passage to the Blessed Realm.

A New High King: With the death of Fingolfin, his son Fingon assumes the Noldor crown.

War Evermore: Though things have been peaceful in Beleriand for some time, matters are rushing to a head now, and the next several chapters will see much battle and destruction.

Morgoth Wounded: Though Morgoth wins his duel with Fingolfin, he is injured by Thorondor the Eagle, and his power continues to wane.

Barahir’s Band: Barahir’s people are on the front lines of the battle against Angband, and his army is soon whittled to just a handful of followers, including his son Beren.

The Coming of the Easterlings: During this time, more Men begin to enter Beleriand from the East. These men are of varying allegiances – some are glad to serve Morgoth, others not.

Húrin’s Children: Húrin becomes king of the house of Hador and by his wife Morwen fathers three important children: Túrin, Nienor, and Lalaith.

Interested to learn more about Chapter 18 of The Silmarillion? Watch this video for a through discussion of the chapter’s contents.