SilmGuide:
Chapter 19
Of Beren and Lúthien

A Love Story That Changes Middle-earth

Among the tales of sorrow and of ruin that come down to us from the darkness of those days there are yet some in which amid weeping there is joy and under the shadow of death light that endures. And of these histories most fair still in the ears of the Elves is the tale of Beren and Lúthien. Of their lives was made the Lay of Leithian, Release from Bondage, which is the longest save one of the songs concerning the world of old; but here the tale is told in fewer words and without song. 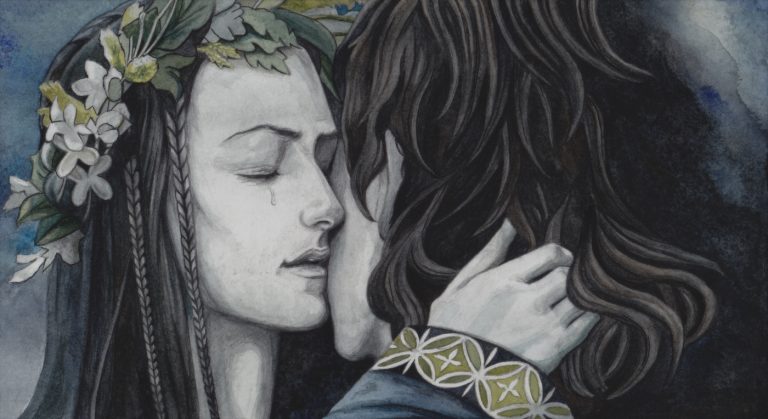 Image: “‘Wait for me beyond the Western Sea …’” by peet

THE QUEST FOR A HOLY JEWEL

In my view, “Of Beren and Lúthien” is the crown jewel of The Silmarillion. I love it so much I wrote a book about it. It was one of Tolkien’s favorites too, and it’s one of the longest chapters in The Silmarillion. It picks up where the last chapter left off, in the aftermath of the Battle of Sudden Flame.

Beren: Son of Barahir, he is the lone survivor of Barahir’s band and becomes a “lone wolf” outlaw in the regions north of Doriath.

Lúthien: Daughter of Thingol and Melian, she is a unique being as the offspring of Elf and Maia.

Sauron’s Treachery & Gorlim’s Failure: Though promising Gorlim reunion with his wife even as he tortures him, Sauron proves just how despicable he is when he gets the information he needs and then puts Gorlim to death.

Beren and Lúthien Meet: After years alone in the wilderness, Beren comes stumbling into Doriath and happens upon Lúthien dancing in the open, beneath the moon and stars. They fall for one another, and are enmeshed in one another’s fates.

Thingol’s Brideprice: Thingol is not pleased when he learns of Beren’s interest in his daughter, but he opportunistically sends Beren on a quest to obtain a Silmaril from the Iron Crown of Morgoth as a bride price.

Battles with Sauron: Finrod does battle with Sauron in song. Finrod responds to Sauron’s music of betrayal and treachery with songs of escape, release, and heroism. Ultimately though, Sauron recalls the kinslaying, and Finrod is defeated.

Sauron Defeated: With Finrod and Beren imprisoned by Sauron, Lúthien arrives and through song breaks the power of the prison. With the help of the Valinorian wolf-hound Huan, she defeats Sauron and sends him fleeing. Finrod though is slain defending Beren from a werewolf.

Morgoth Nurtures a Hell-hound: With rumors of Huan’s greatness spreading, Morgoth breeds his own great hound, imbuing him with a share of his own power. Carcharoth grows massive and is set as a guard upon the gates of Angband.

The Invasion of Angband: After putting Carcharoth to sleep, Beren and Lúthien descend into the dungeons of Angband to Morgoth’s throne room and, again through Lúthien’s power of music, triumph in their mission, though at the cost of Beren’s hand.

Carcharoth’s Rampage: Having swallowed the Silmaril, Carcharoth tears through Beleriand on a maddened and destructive rampage, and is brought down at the cost of Beren and Huan’s lives.

Doomed Love: When Lúthien falls for Beren, it is said that being immortal she came to share in Beren’s mortality. This will apply in a number of ways.

Thingol’s Arrogance: Thingol demonstrates utter contempt not only for Beren but for Men in general. Furthermore, in sending Beren on an “impossible” quest he shows that his arrogance has led him into grave foolishness, something Melian recognizes and calls out. The irony, of course, is thick.

The Doom of Doriath: Though Doriath has essentially been untouched by the troubles of Beleriand, Thingol’s underhanded dealing nevertheless ensnares it in greater fates.

The Oath’s Shadow: The oath of Fëanor essentially cursed the Silmarils so that they ensnare and trap those who would seek to possess them. This cursed oath seems to come to life with Thingol’s mission for Beren.

Elf-maiden’s Best Friend: Huan is a wolf-hound of Valinor that had been given to Celegorm by Oromë. However, he switches allegiances when Celegorm and Curufin attack Lúthien.

Lúthien’s Power: Lúthien’s song has the power to break prison walls. This of course recalls the creative power of the Music of the Ainur, and leads to the consideration that music may by the most powerful force in Middle-earth. It is also the first great eucatastrophic moment in the tale.

The Holy Jewel: Though beautiful, the Silmarils seem to exude a heavy holiness. Beren is able to hold it without getting burned, yet it burns Carcharoth from the inside.

Mission Accomplished?: Beren must return empty-handed, and though the Silmaril is recovered, it is at the price of his own life.

Lúthien’s Plea: Once again, Lúthien’s song proves more powerful than just about any other force in Middle-earth, as she is able to win Beren’s release after singing before Mandos.

Interested to learn more about Chapter 19 of The Silmarillion? Watch this video for a through discussion of the chapter’s contents.