Then in the plain of Anfauglith, on the fourth day of the war, there began Nirnaeth Arnoediad, Unnumbered Tears, for no song or tale can contain all its grief... 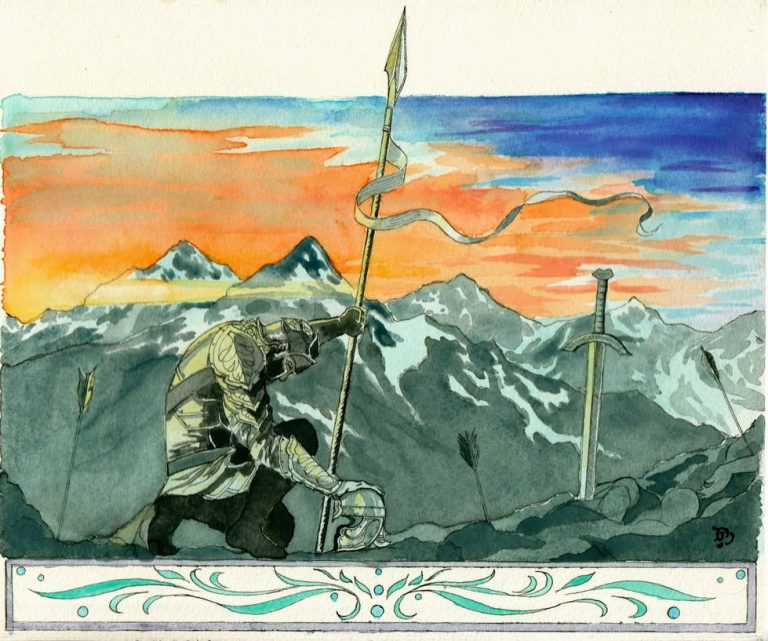 SHALL MORGOTH BE OVERTHROWN?

After Beren and Lúthien’s excellent adventure, what could possibly come next? Only a great battle brimming with bloodshed and “Unnumbered Tears” of course! First though, Tolkien provides a brief epilogue for Beren and Lúthien, giving them a happy ending, though, in true Tolkienian fashion, leaving Melian with a “grief of loss” heavier than anyone has ever known.

With the exploits of Beren and Lúthien having demonstrated Morgoth’s vulnerabilities, the time seems ripe to press the attack, and that’s where the story of the Fifth Battle of Beleriand picks up.

The Union of Maedhros: Having learned of Morgoth’s vulnerabilities thanks to the exploits of Beren and Lúthien, Maedhros summons whatever free peoples he is able to to press the attack against Angband.

The Day Has Come: When Turgon and the forces of Gondolin arrive at the battle, Fingon’s heart grow strong and it looks for a brief moment like the Union of Maedhros might triumph over Angband.

Unnumbered Tears: On the 4th day of battle, Morgoth unleashes the greatest of his forces, the Balrogs and dragons, leading to the death of Fingon, High King of the Noldor, at the hands of the Balrog Gothmog.

The Triumph of Morgoth: With Fingon and countless others dead, the remaining force of Maedhros’ Union must retreat.

The Seven Ships of Cirdan: Turgon instructs Cirdan the shipwright (of the Grey Havens) to construct seven ships and send them west over the Great Sea to seek the aid of the Valar. None of them are able to complete the mission though.

The Torment of Húrin: Morgoth captures Húrin, Huor’s brother, and subjects him to torment upon a throne of Thangorodrim.

Morgoth’s Spies: Morgoth is the king of treachery, and he has placed spies everywhere among the peoples of Beleriand. He is not caught unaware at the plotting of the Noldor.

The Treachery of Men: For all their losses, it looks like the Union of Maedhros might in fact triumph, but the betrayal of the Easterlings finally proves too much for them to handle, being assailed on 3 sides.

The Sundering of Fëanor’s Sons: Though none of them die in the battle, nevertheless the battle represents the end of their power and influence in Beleriand.

The West Still Closed: Though one of the sailors does receive help from Ulmo, it is a pittance compared to the aid they seek from the Lords of the West. The Valar seem uninterested in aiding the peoples of Beleriand.

Is it secret? Is it safe?: The days of Gondolin’s secret location seem numbered. The brief reference to Maeglin alludes to its coming doom.

Interested to learn more about Chapter 20 of The Silmarillion? Watch this video for a through discussion of the chapter’s contents.