Thus was the fate of Túrin woven, which is full told in that lay that is called Narn i Hîn Húrin, the Tale of the Children of Húrin, and is the longest of all the lays that speak of those days. 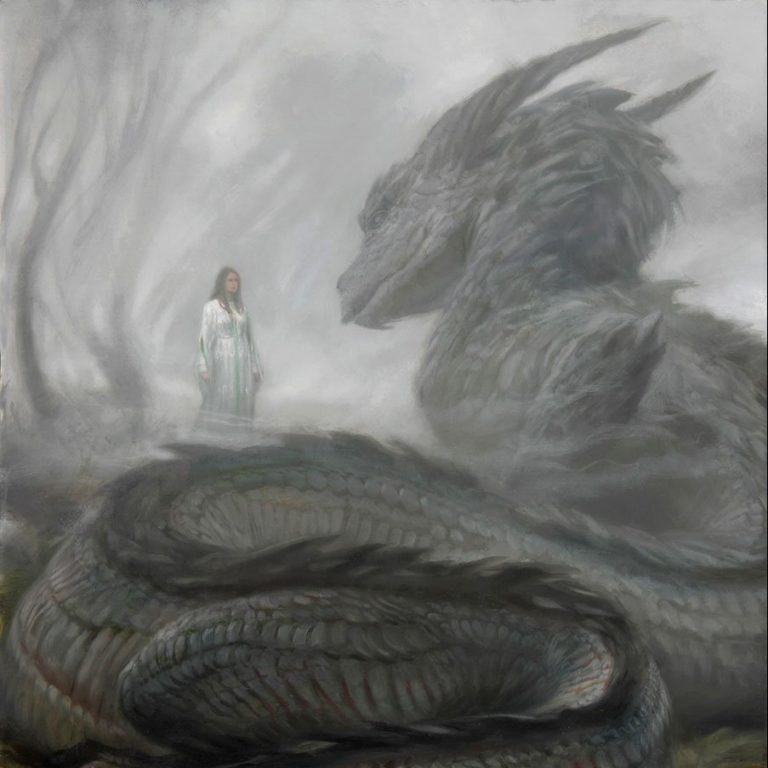 OF FATE AND TRAGEDY

The tale of Túrin Turambar is a long one, rivaling “Of Beren and Lúthien” and “Akallabêth” as the longest chapter in The Silmarillion. It is also quite tragic, as we shall see. After giving a bit of background on Túrin’s ancestry, it picks up where the last chapter left off, with Túrin’s father Húrin imprisoned in Angband. The chapter focuses in on Túrin’s life.

Túrin: Son of Húrin and Morwen, he is raised in Menegroth and fostered by Thingol.

Beleg: Túrin’s companion in arms, he is a great warrior and nicknamed “Strongbow.”

Mîm: One of the last survivors of an early race of dwarves.

Orodreth: The king of Nargothrond since the death of Finrod.

Glaurung: We’ve seen his immense power of battle in other cases; here we glimpse his psychic abilities.

The Death of Lalaith: Lalaith was Túrin’s sister, whom he much loved. She dies at the age of 3, from a pestilence “borne on an evil wind out of Angband.” This casts a shadow over the young Túrin.

The Death of Saeros: One of the Nandor elves and a counsellor of Thingol, Saeros is jealous of Túrin and often taunts him. He dies after a confrontation with Túrin, leading Túrin to feel responsible for his death.

The Death of Beleg: When Beleg attempts to rescue him, Túrin accidentally kills him when he thinks Beleg is an orc come to torment him.

The Sack of Nargothrond: Glaurung the Dragon and an army of orcs slip behind the armies of Nargothrond and ransack the once glorious city, sending its inhabitants elsewhere.

Túrin Slays Glaurung: Túrin eventually tracks down Glaurung and kills him while he sleeps, though he is injured by the venomous black blood that issues forth from the beast.

The Tragedy of Túrin and Nienor: Through Glaurung’s mind-games with them, they live a brief romance that will result in both of their deaths.

Eöl’s Handiwork: Thingol gives Beleg the sword Anglachel, but Melian sees “malice in the sword.” It is the work of Eöl the Dark Elf, and it would seem that the blade brings misfortune to its wielder.

Pitiable Petty Dwarves: The dwarves of Mîm were the first dwarves to come into Beleriand, a banished people, and they were often hunted by the Sindar. They hate elves as much as they hate orcs.

Túrin Is No Beren: Gwindor sees Finduilas’ love for Túrin and does not begrudge it, yet he warns her that though Túrin is great, he is not Beren, and a “dark doom” lies before him.

Túrin’s Pride: Though Ulmo had warned them not to leave Nargothrond, and Orodreth had been willing to heed this word, Túrin’s pride leads the armies of Nargothrond out, and leads to the end of the city.

Glaurung’s Spell: Glaurung is able to weave a spell of forgetfulness upon both Túrin and Nienor, leading to their incestuous marriage.

The Black Blade Broken: As he is about to kill himself, Túrin speaks to Gurthang, the blade bequeathed him from Eöl, which seems glad to have the task of slaying him. Once Túrin dies, the blade is broken.

Interested to learn more about Chapter 21 of The Silmarillion? Watch this video for a through discussion of the chapter’s contents.