SilmGuide:
Chapter 22
Of the Ruin of Doriath

THE BEGINNING OF THE END

But now the rumour ran among the scattered Elves of Beleriand that Dior Thingol’s heir wore the Nauglamír, and they said: ‘A Silmaril of Fëanor burns again in the woods of Doriath’; and the oath of the sons of Fëanor was waked again from sleep. 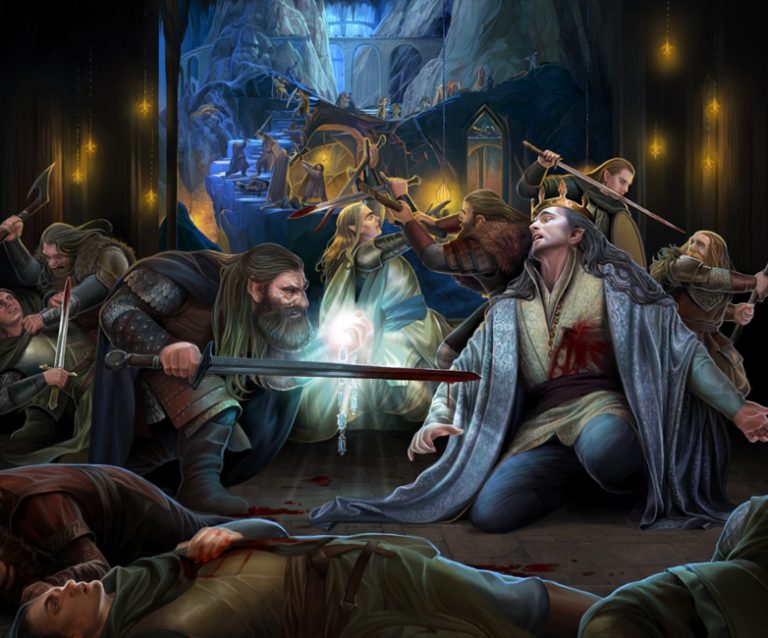 Image: “Death of Thingol” by steamey

DWARVES AND ELVES AT WAR

“Of the Ruin of Doriath” is not one of the longer chapters in The Silmarillion, but it is perhaps the most packed with hugely significant events. There’s a ton of stuff that I could speak about, but I’ve tried to boil it down to the bare essentials. It all picks up after the death of Túrin and Nienor, Húrin’s children.

Húrin’s Release: With the deaths of Túrin and Nienor, Morgoth sets the tormented Húrin free to roam about Beleriand in the hope of causing more destruction.

The Feud of the Nauglamir: Húrin finds the Nauglamir – Finrod’s necklace from the dwarves – in the ruins of Nargothrond. When he brings it to Thingol, it sets off a feud between the Sindar and the Eldar, especially as Thingol sets in it Beren’s Silmaril.

The Death of Thingol and the End of Doriath: The dwarves slay Thingol and with his death Melian departs Beleriand, leading to the eventual downfall of the great realm of Doriath.

A Silmaril In Play: When Thingol puts the Silmaril in play (hoping to set it in the Nauglamir), he sets off a chain of events that leads to incredible death and destruction. For some reason, Silmarils seem to have that effect on the peoples of Middle-earth.

Thingol’s Racist Pride: In an outburst, Thingol insults the dwarves as a “stunted people” and brings down serious dwarf-wrath on himself. This, of course, leads to his death. Remember his attitude toward Beren?

Thingol’s Heir: Dior, the only son of Beren and Lúthien, assumes the throne of Menegroth upon Thingol’s death, but his dominion is short lived, as the Sons of Fëanor assault Menegroth, hoping to obtain the Silmaril, and kill him. Yet Dior’s daughter, Elwing, survives.

Interested to learn more about Chapter 22 of The Silmarillion? Watch this video for a through discussion of the chapter’s contents.