SilmGuide:
Chapter 23
Of Tuor and the Fall of Gondolin

At last, in the year when Eärendil was seven years old, Morgoth was ready, and he loosed upon Gondolin his Balrogs, and his Orcs, and his wolves; and with them came dragons of the brood of Glaurung, and they were become now many and terrible. 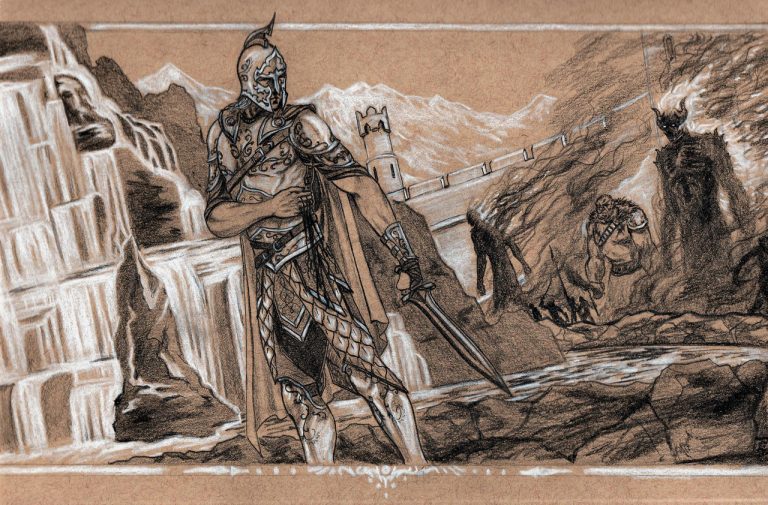 Image: “Ecthelion of the fountain” by Snow-Monster

You’ll recall from Chapter 20, during the Battle of Unnumbered Tears, Huor (brother of Húrin) says to King Turgon of Gondolin that “from you and from me a new star shall arise.” With Chapter 23, we pick up that story.

Tuor: The son of Huor, he is raised by Grey-Elves, but enslaved by Easterlings. When he escapes, he is drawn to the shores of the Great Sea.

Idril: The daughter of Turgon, King of Gondolin, whom Tuor weds.

Maeglin: Turgon’s nephew, you’ll recall he is the son of Eöl the dark-elf and Turgon’s sister Aredhel. He harbors a strong desire for Idril that leads to a burning jealousy.

Under the Infuence of Ulmo: Tuor is drawn to the sea by Ulmo, and Ulmo tells him to go to Gondolin with a warning to abandon Gondolin and move to the Vale of Sirion (down by the sea).

The Fall of Gondolin: When Turgon ignores Ulmo’s warning, the Curse of Mandos comes full circle, and Morgoth learns the whereabouts of Gondolin. An army of Balrogs, Dragons, and orcs assaults the city, and it falls, along with Turgon and many of its inhabitants.

The Birth of Eärendil: Through the marriage of Tuor and Idril,  Eärenil Halfelven is born. He is the “new star” of whom Huor prophesied in the Battle of Unnumbered Tears.

Maeglin’s Treachery: Though Maeglin is treated as Turgon’s “right-hand man,” his lust for Idril gets the best of him, and when he is captured by Morgoth, he all too easily betrays the location of Gondolin.

Turgon’s Pride: Though he receives an oracle from Ulmo, Turgon believes Gondolin is unassailable, and he adopts an “isolationist” mentality. This leads to his death and the fall of Gondolin.

Ulmo the Advocate: With the fall of the 3 great Elven realms of Beleriand (Nargothrond, Doriath, and Gondolin), it appears that Middle-earth will fall into an impenetrable darkness. Yet Ulmo seeks to stir the sympathies of his fellow Vala to come to the aid of Beleriand.

Interested to learn more about Chapter 23 of The Silmarillion? Watch this video for a through discussion of the chapter’s contents.